The Writing Center Excellence Award is given yearly to the peer consultant who has demonstrated the willingness and ability to provide empathetic, growth-oriented feedback to their classmates, to serve as an outstanding ambassador for our program in our school and surrounding community every day, and to go above and beyond their role or title to ensure the Writing Center’s success. 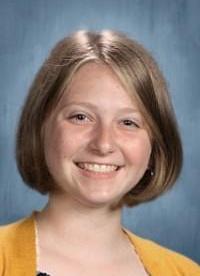 Markey’s ability to build empathetic, trusting connections with everyone she meets was evidenced by the number of her classmates that would seek her out again and again for advice, support, and affirmation.  In each of these tutoring sessions, Markey made her peers feel like the most important people in the room: she honored their knowledge, valued their ideas, and supported their languages and literacies.  Markey was deeply invested in the success of others.

Markey also showed a passion for making systems and processes fairer, as she used her senior-year badge project to develop materials and resources to demystify the college application process.  Markey created a series of videos to help her classmates navigate the Common Application, and she held a College Application AMA event where students in ninth, tenth, and eleventh grades could ask important questions about the process and seek peer advice.  Markey’s videos and her AMA event supported students through the complex college application process in a year where extra guidance was as important as ever before.

Over her two years in the Writing Center, Kelsey excelled as a leader by example: she provided affirming mentorship for other tutors, played a central role in our team building and training, and supported our external literacy initiatives prior to the pandemic. Kelsey brought compassion, respect, and a strong moral compass to her work in the Writing Center; she embraced and enacted her core values and the values of the Writing Center to ensure that we were bending our school and our community toward justice, fairness, and equity. Kelsey never equivocated: justice was always central to everything she did.

During her senior year, Kelsey worked with two other Writing Center tutors to research, develop, and implement our Access and Accessibility statement to support our organization’s goal of helping everyone find success as their fullest selves. Kelsey read voraciously, attend lectures, talked with students, and sought out other experiences to ensure that the statement she was writing with her peers was robust, meaningful, ad inclusive. Kelsey’s research, deep thinking, and core values allowed our Writing Center to get closer to our aspirations; her work serves as a foundation for the second decade of the Skyline Writing Center.

Through her immense compassion and incredible intelligence, Savanna encouraged so many of her classmates to use the Writing Center and to become tutors themselves.  The number of students currently tutoring because of their interactions with Savanna is too many to count.  In many ways, Savanna’s ability to build human relationships with classmates outside of academics in many ways helped students believe in themselves enough to see themselves as helpers, not just people needing to be helped.  Savanna always presumes competence and consistently finds ways to help students use that competence to complete their work in their way.

Throughout her two years in the Writing Center, Savanna developed a passion for radical, humanized education reform and become an advocate for ending oppressive practices like grading and standardized testing in our schools.  This helped her redefine her own metrics of successes and allowed her to help others do the same.  Her writing and activism in imagining a more equitable and inclusive future for our program, our school, and our community.

Alaina’s impact in the Writing Center can only be measured in the relationships that she developed with writers from across Skyline.  The number of students continually streaming into the Writing Center to work with Alaina was impressive, as they admired her awesome sense of humor, her willingness to share vulnerability, and her ability to provide great feedback while allowing them to maintain their voice and their ideas.  Alaina used an asset-based approach in every session, as she was able to recognize each writer’s strengths and focus on them rather than looking for deficits.  She truly embraced the idea that everyone has funds of knowledge that should be valued and multiplied. Maybe the most impressive part of Alaina’s time as a tutor was her consistent and unyielding willingness to go above and beyond for every writer she worked with.

When tutoring, Amanda’s was patient, calm, and caring.  The students Amanda worked with always felt like they received the help they needed without any judgment, ego, or vanity.  Whether a student needed five minutes of help or fifty minutes of help, Amanda was ready to help her classmates tap into their funds of knowledge, use their voice, and find academic success in classes ranging from English Plus to AP English Literature.  Every student Amanda worked with said that she was respectful, empathetic, and saw them as an equal, and every student said that Amanda helped them significantly.

Amanda played a significant role in planning the 2018 Teen Spirit Release Party at Literati Bookstore and she was a driving force in helping build an awesome community in the Writing Center.

Throughout her Writing Center tenure, Miranda showed a sophisticated understanding of the affective dimensions of peer tutoring, as she worked diligently to form connections with all students with whom she collaborated by thoughtfully and courageously sharing vulnerability with them. These connections formed because Miranda is truly empathetic, as she always puts the needs of the writer before her own. Indeed, Miranda understood, perhaps better than anyone, the power that relationships have in the Writing Center to build a student’s confidence, to break through perceived deficits, and to rekindle imaginations extinguished by the limitations of education. With Miranda’s careful, thoughtful guidance, students were able to multiply their funds of knowledge and find success in school, sometimes for the first time in their high school career. To this end, Miranda has worked to triangulate support for students with other peer-to-peer programs at Skyline, such as SkySquad and the Math Mentoring Program, a kind of sophisticated advocacy that requires both care and commitment.

Miranda’s quiet leadership in Writing Center was well received by her peers, her teachers, and our director. Miranda’s unyielding passion for tutoring, her unparalleled compassion for her classmates, and her incomparable sense of integrity provided models for others wanting to be truly exceptional tutors. Miranda’s ongoing one-on-one tutoring with several at-promise students during Skyline’s spring term was remarkably successful because of her ability to boost those around her to new heights. Put simply: Miranda ends her Writing Center career as an unimpeachable model of excellence for all of the program’s future tutors, as she displayed the “everyday leadership” that is at the core of every Writing Center consultant’s beliefs and values.

In addition to her tutoring work, Miranda also worked to create brochures for our Writing Center that can help students and tutors with common writing questions. This, along with many other examples, shows Miranda’s persistent dedication to ensuring all of her Skyline classmates have the highest quality writing supports available to them.

Celia, a consultant with the Writing Center for both her junior and senior years, exemplified the core values of our program by working closely with students to find their strengths and actualize them in their assignments. Celia worked from the perspective that everyone has something to say and the ability to say it, but sometimes help is needed to find the best words, work through different structures, and build the confidence necessary to submit a paper to a teacher, a story to a literary magazine, or an essay to a college or university. Because Celia was committed to thinking about a student’s assets rather than their deficits, she always provided growth-oriented feedback to ensure that students could improve not only the current assignment but future assignments as well.

Celia ended her Writing Center career as one of the top rated tutors in program history, frequently earning perfect feedback scores from students and high praise from teachers. It is unsurprising, then, that Celia often served as a spokesperson for the Writing Center, encouraging more students and teachers to use the Writing Center’s services to in an effort to ensure that all Skyline students had access to writing support across the curriculum.

Celia was also an exceptional ambassador for the Writing Center program. Celia served as an editor of the fourth edition of Teen Spirit, published in May 2016, contributing untold hours to ensuring that the publication was one of which the Writing Center, our school, and our broader community would be proud. As an editor, Celia was responsible for selecting the pieces that would comprise Teen Spirit, laying out the publication, and editing it for errors. She was also one of the featured readers at Literati Release Party for the 2016 edition of Teen Spirit. Celia also wrote and secured a grant from the Skyline PTSO to assist us in pressing our collectible 7″ vinyl records featuring that came with this year’s book. Celia’s diligent, perseverant work provided leadership by example in the Writing Center for other students, as she showed what unyielding hard work can accomplish for the good of a program and a school.